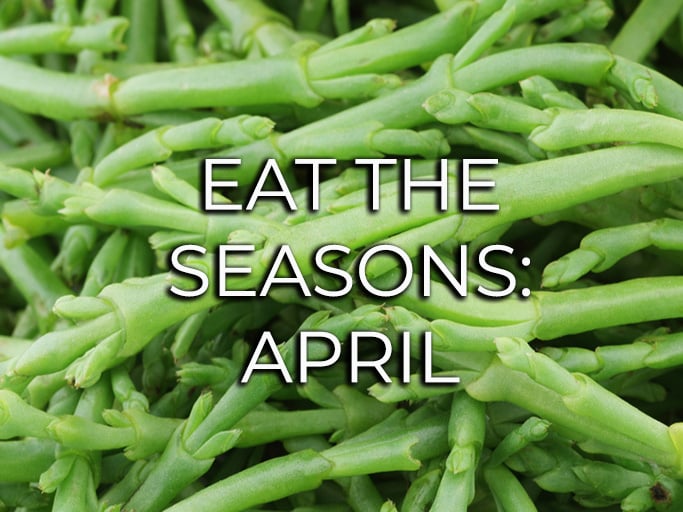 With Easter coming up, the best of this year’s spring produce has started appearing in our shops. Take a look below and what’s in season this April!

A member of the lily family, and also related to onions, leeks and garlic, asparagus in a perennial vegetable that grows from crowns. Asparagus is also rich in saponins, a type of phytonutrient credited with reducing the risk of cancer, maintain blood pressure, regulating blood sugar and controlling lipid levels. No wonder Queen Nefertiti proclaimed it to be the food of the Gods!

Also known as arugula, rocket is a leafy vegetable that is a part of the mustard family. Rich in vitamins A, C, K and B as well as potassium, magnesium and phosphorus, rocket has a peppery taste that adds a little kick to salads.

Another relative of the mustard family, and an often overlooked leafy green, watercress packs a powerful nutrient punch and has one of the highest densities of vitamin K in any food. Thought of as the ‘original superfood’, it is said that in the year 400BC, Hippocrates located his first hospital neat a stream so that he could grow a plentiful supply of watercress to help treat his patients.

A succulent plant belonging to the carrot family, samphire originates from the Mediterranean but can be found all over Europe. A great source of vitamins C, A amd B, samphire grows coastally on cliffs and rocky edges, and has a naturally salty flavour that is the perfect accompaniment to fish dishes.

The tiniest member of the allium family, chives became a popular herb in the 19th century and are super easy to grow at home. Not only are these garlic-onion flavoured herbs delicious, but they are also a great source of fibre, riboflavin, iron, folate and vitamins A, C, K & B6.